RDR2 All of Chapter 4 – All Gold Missions – Barebones 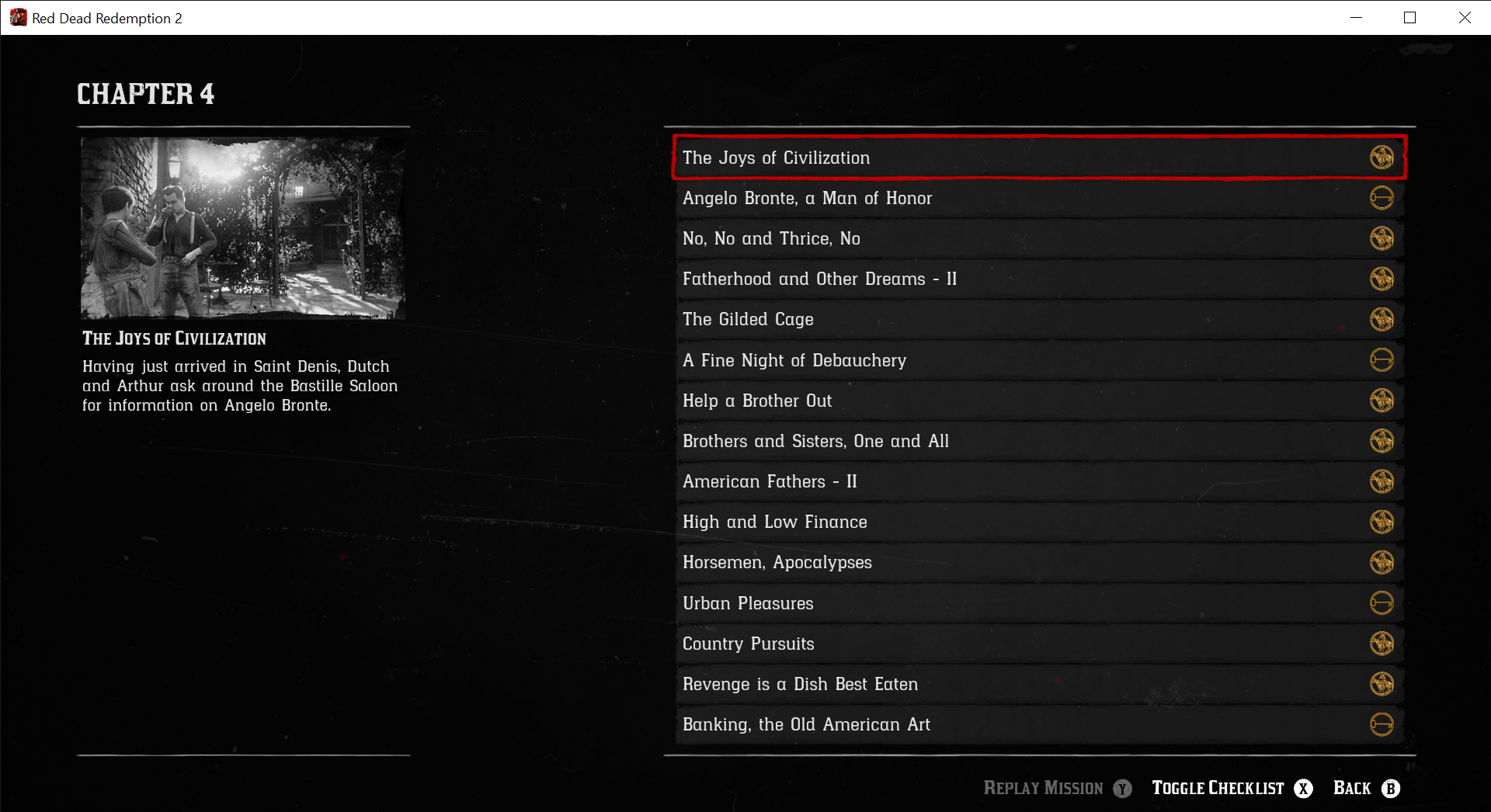 RDR2 All of Chapter 4 – All Gold Missions – Barebones

Included are save files for every mission in Chapter 4 with Gold medals across the board. By “barebones”, I mean that I’ve done nearly nothing besides complete the story missions. Virtually everything else still remains for you to do. It’s an unspoiled world! I’ve included a text file that indexes which missions correspond to which save file.

This is from the RDR2 PC Ultimate Edition. Included are save files for every mission in Chapter 2 with Gold medals across the board (as well as all golds for Chapter 1). By “barebones”, I mean that I’ve done nearly nothing besides complete the story missions. Virtually everything else still remains for you to do. It’s an unspoiled world! I’ve included a text file that indexes which missions correspond to which save file.

However, keep in mind that I will be posting the rest of the chapters as I complete this playthrough, and I will be doing what needs to be done to enable 100% completion at the end. That means that I am picking up such things as companion requests and companion missions, although I’ve made an effort to leave them available long enough for you to have a chance to do them, should you choose to.

An index of the missions is included in the archive file.

To be more specific about what I’ve done:
– I’ve avoided random interactions like the plague (although the game says I’ve encountered 3 – grumble grumble).
– I’ve completed no stranger missions unless they are required to trigger later missions (We Loved Once and True; Good, Honest, Snake Oil).
– I’ve done no pelt hunting, which means I haven’t upgraded your satchel at all.
– I haven’t even met the Trapper, let alone turned anything in to him. I’ve also purchased no clothing otherwise.
– The Animal Compendium is virtually untouched, with only a few exceptions like the deer and buck.
– I haven’t purchased any guns, and I’ve only acquired the ones that are free or found, although I have fully upgraded the few that I have.
– I’ve done no work on any of the Challenges, although a little progress is unavoidable, like skinning 3 deer and winning a few hands of poker during the Reverend’s mission.
– I haven’t picked up a single gold bar or any miscellaneous loot.

The following is what I have done:
– I snatched up almost all of the Aged Pirate Rums, Ginseng Elixirs, and Valerian Roots, so Arthur isn’t a wimp. Playing with just a few tanks is infuriating.
– I have mostly upgraded the camp’s rations, medical supplies, armory, the tents (to get fast travel), the horse’s station, and the chicken coop. But I haven’t added any extras like decorations or snake skin banjos and such.
– In Chapter 3, I start using the Warped Brindle Arabian (which is a second class Arabian anyway) found in the mountains near Wapiti.
-Mild spoiler warning: I did pick up the Carcano rifle during the companion mission with Uncle and the Mauser pistol during Revenge is a Dish Best Eaten.
-In lieu of picking up stashes of loot, I built up my coffers early on by hijackings passenger trains and taking them to the Ambarino tunnel several times (that thing is easy money and earns you no bounty, look it up if you don’t know what I’m talking about).

If I think of anymore details that could possibly be relevant I’ll add them later. And if you have any questions at all, please ask. Thanks!