RDR2 All of Chapter 6 – All Gold Missions – Barebones 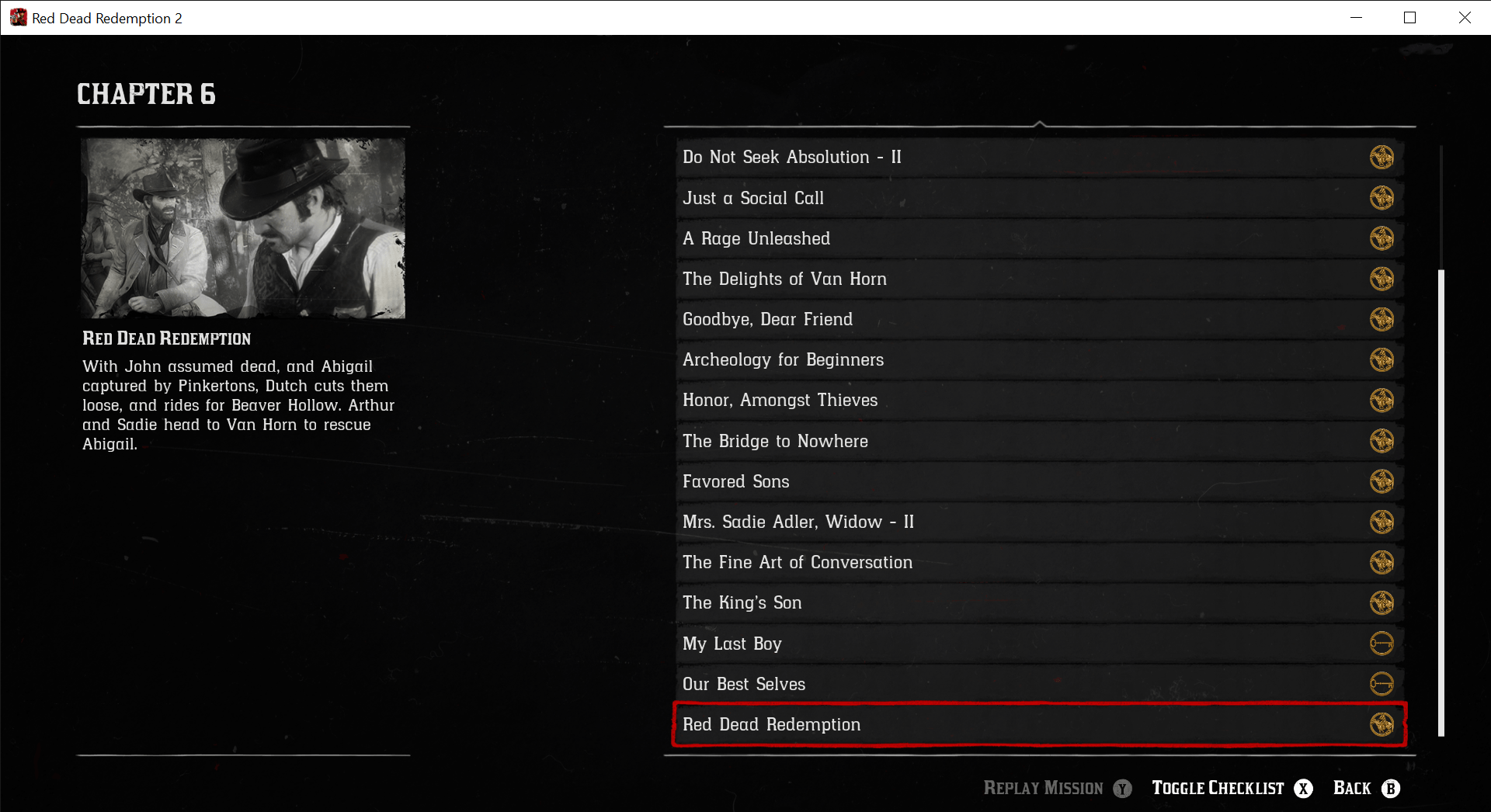 RDR2 All of Chapter 6 – All Gold Missions – Barebones

Included are all the save file for Chapter 6 with Gold medals for each. By “barebones”, I mean that I’ve done nearly nothing besides complete the story missions and the missions that won’t be available in the epilogue. Virtually everything else still remains to do. Included is a text file that indexes which missions correspond to which save file.

***I did something in this chapter that has big consequences for the Epilogue, so please read through to the end to find out what that is. It comes with a slight spoiler warning.***

This is from the RDR2 PC Ultimate Edition. Included are save files for every mission in Chapter 6. As with all entries in my “Barebones” series of saves, other stranger missions, random interactions, etc., have all been circumvented so that you can enjoy them yourselves. However, as noted below, Chapter 6 has several events that change the outcome of the epilogue, so this time there are several voluntary missions and stranger interactions that I did complete. I did try to give you time after they become available to do them yourself. Virtually everything else still remains for you to do. I also made sure that John will have plenty of money in the Epilogue, as I describe below.

I want to emphasize that these files have not been corrupted by mods like Lenny’s Trainer. Not that I have anything against such mods, but they tend to corrupt saves making the game freeze up between later chapters. If anybody ends up with a corrupted save file and you can’t find another explanation, please let me know!

I’ve included a text file that indexes which missions correspond to which save file.

To be more specific about what I have NOT done:
– I’ve avoided random interactions like the plague (although the game says I’ve encountered a few – grumble grumble).
– I’ve completed no stranger missions unless they are required to trigger later missions or story elements (We Loved Once and True; Good, Honest, Snake Oil, Charlotte Balfour, or Fourbutts, or whatever her name is).
– I’ve done no pelt hunting, which means I haven’t upgraded your satchel at all.
– I haven’t even met the Trapper, let alone turned anything in to him. I’ve also purchased no clothing otherwise.
– The Compendium is far from filled out. I didn’t even pick any plants besides a few of the basics.
– I haven’t purchased any guns unless it’s to complete a set from one that I found, and I’ve only acquired the ones that are free or found through missions. They have all been fully upgraded, but not personalized.
– I’ve done no work on any of the Challenges. However, a little progress is unavoidable, like knifing a few enemies and winning a few hands of poker during the Reverend’s mission.
– I haven’t picked up a single gold bar, random weapon, or any loot besides tonics that level up Arthur’s health and Dead Eye and such. The only such thing I’ve received is the gold ingot that is given to Arthur. Instead, I built up my coffers early on by hijackings passenger trains and taking them to the Ambarino tunnel several times (that thing is easy money and earns you no bounty, look it up if you don’t know what I’m talking about).

*** I played through the Aberdeen Pig Farm and did NOT retrieve my money. This is the only way to pass on Arthur’s money to John in the Epilogue, so it’s still there to be picked up. It’s a lot of money, so John won’t be short on change at all. ***

I loathe to do all these extra things since this is supposed to be a “barebones” playthrough, but I also didn’t want to pass up on missable content, especially content that has consequences for the Epilogue.